The
DEMACO Family
Welcomes You!

Our customers range from entrepreneurial startup ventures to the top 20 food companies in the world.

We are the world leader in pasta machinery for ready meals with a history in this segment going back to the early 1970’s. We also build equipment for snacks and cereals as well as dry, filled, fresh and canned pasta products.

Our specialists are ready to assist with technology to make perfect pasta.

At DEMACO, customers come first and an integral part of our DNA is creating long-lasting customer partnerships.

We lead the industry in manufacturing sanitary pasta extruders for prepared foods and fresh pasta. We develop technology and solutions that provide lasting customer value and produce superior food products.

The concept of Italian culinary tradition combined with American engineering excellence began with our founder Ignazio De Francisci in 1914. Over time the needs of our customers have changed but our basic approach has remained constant. Provide a machinery package that produces superior finished product and has the durability to serve as the foundation of our customers businesses. We build machinery that is the rock that many world famous brands have been built on.

Today’s DEMACO helps producers stay at the forefront of cereal foods technology, quality and productivity. Our goal is to deliver not only machinery to the highest standard but to be an active partner in our customer’s success story. 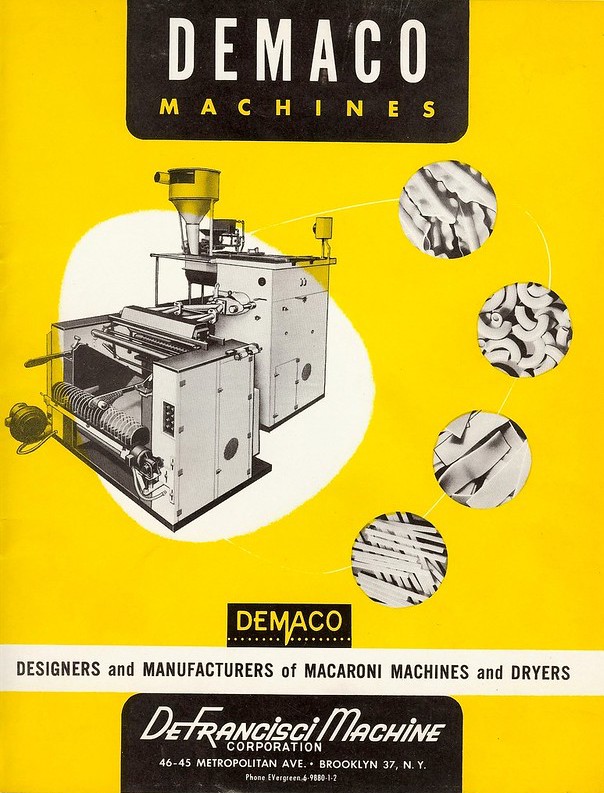 It is with gratitude and appreciation to pasta makers everywhere that we enter our 100th year. Pasta is a wonderful product and we have had the opportunity to meet and work with so many interesting, brilliant and creative people – Thanks.

In the beginning Engineer Ignazio De Francisci and his family came to the United States. Ignazio was a respected engineer in his native Sicily, where he designed and operated the first refrigeration plant to manufacture block ice. He also designed and built one of the first bicycles in Italy.

In the USA Ignazio and his son Giuseppe obtained jobs working at a button factory. In 1905 Ignazio approached the owner of the factory with a proposal. If he would buy Ignazio and his son tools and provide a place to work – he would build him automatic machinery to produce the buttons. They made a deal and this resulted in Ignazio’s first US patent for buttons and button machinery.

Ignazio’s family owned a pasta factory in Palermo Sicily called Pastaficio Virga. Using his knowledge of Pasta making and his ability to create machinery he found a niche. As thousands of Italians came to America the need for pasta increased. Working with Italian pasta entrepreneurs the De Francisci’s were able to supply this growing market with modern production equipment. Most of the household brands in today’s pasta industry were built using DEMACO equipment.

Over time young Giuseppe became one of our industry’s most prolific and innovative designers of pasta equipment. Under his leadership the company grew to be one of the foremost food machinery companies in the world producing over 52 dry pasta lines a year. Throughout this period DEMACO maintained technological leadership with the introduction of increasing levels of automation and control to the pasta process.

In 1952, Giuseppe revised his organization to accommodate his three sons; Ignatius, Joseph and Leonard. Each of the three brothers was an accomplished engineer and they rapidly set about making their own mark on the pasta industry. Creative innovative designs fueled sales. In fact until 1983 DEMACO had no sales department – all sales were made on word of mouth and reputation alone. The company continued to grow on its strong reputation for engineering excellence.

In the 1970’s and 1980’s a new generation began at DEMACO. The company prospered and began to shift its focus to the growing market for ready meals and other prepared foods. This was an area in which DEMACO’s highly sanitary extruders and sheet formers excelled.

In the early 1990’s DEMACO’s became part of a European public technology conglomerate – Howden Group PLC. DEMACO thrived and stayed under the leadership of the De Francisci family with Leonard De Francisci as its President. In 2008, the family acquired the assets of DEMACO.

For almost 109 years the Company has been run by a family that now under the leadership of Joseph and Leonard De Francisci has reached it’s fourth generation. As we move forward in our pursuit of engineering excellence we continue in our dedication to finding ways to manufacture better pasta.

Please send us a message for more information.